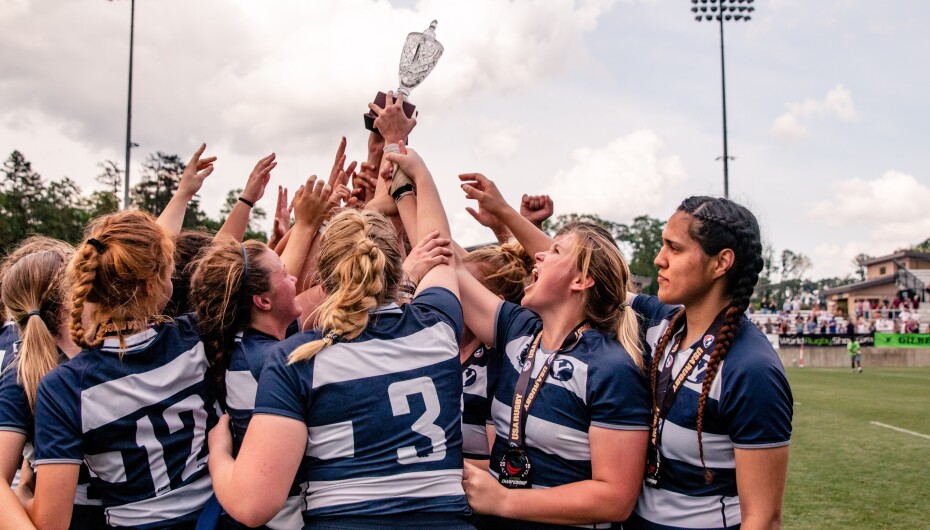 Saturday, May 4 2019 - By Jackie Finlan (Recap Courtesy of The Rugby Breakdown)

Virginia Tech made the first big impression, using an unforced passing error to set up a crisp lineout and driving maul. BYU didn’t join in an attempt to draw a penalty, but as the maul sprinted down field, a defender panicked, joined the maul and legitimized the drive. The defense then swarmed to halt the try just in time. A penalty later followed to extend the Virginia Tech attack, but back-to-back errant passes eventually ended the Hokies’ first big scoring opportunity.

BYU had its penalty issues and took a yellow card for repeated infringements at the breakdown, but those mistakes didn’t occur as the result of buckling under pressure. They were aggressive, yet ill disciplined mistakes – in-from-the-side or diving-over penalties while trying to steal the ruck.

Aside from those missteps, the Cougars’ ability to poach possession was a difference-maker. Just when Virginia Tech looked like it was building some continuity or put itself in the position for a steal, BYU took the ball back. Lineouts were also vulnerable. Obviously it was tactically important, but it was also emotionally dampening for the Hokies.

It took 13 minutes for the scoreboard to light up and the opportunity arose after a Virginia Tech forward pass. No. 8 Sandy Kanuch made good ground off the scrum and the recycle to lock Elle Peterson brought more meters. Prop Emily Briggs, who was the emblem of power, finished it off with startling fends for the centered try. Outside center Rachel Strasdas kicked the first four conversions.

Briggs was then yellow-carded at minute 18 – multiple infractions at the breakdown – but the Cougars managed to score while down. Virginia Tech flyhalf Kirn Kaur identified space in the back field and grubbed through but there was no chase, and wing Alisa Baker returned it cleanly and quickly to Tech’s 22. The Hokies’ defense did well to absorb many phases but eventually a high-tackle penalty set up a quick tap and dive-over try from flanker Lefa Stanley, 14-0 after 26 minutes.


Immediately afterward, Baker broke free again and hooker Lora Gubler sucked in the mid-field defense with a powerful carry. Ball eventually made it to Kanuch for the try, 21-0.

Tech got an opportunity when it poached possession in BYU’s end, but Haley Morgan eagerly sprinted ahead unsupported and the ball was turned over. Flyhalf Matalasi Morrissette – a freshman, who was so poised and precise – spied some space for a well placed kick, and Baker scooped it up uncontested. The wing fed Morrissette back inside and the 10 looped a pass to Stanley in quick support. The flanker hit Strasdas on the sideline for the score, 26-0, into the half.

At this point, Virginia Tech had played a lot of defense but the wear didn’t show on the Hokies. Although Briggs scored in the 50th minute, Tech held a lot of possession and kept pushing for 30 minutes. The indisputable leader in this regard was outside center Jetta Owens, who was the epitome of hustle and fire. Anya Fisher, too, was under a ton of pressure all day and just pushed all day.

BYU started to work its bench and the final 10 minutes brought three more tries. Fullback Kainoa Ah Quin did well to insert into the fast, precise back line, and when the ball worked back inside, the forwards linked really well to keep Virginia Tech on the constant move. Senior captain Peterson dotted down twice – once from No. 8 off the back of the scrum – and reserve Pamela Patton bulled her way over the line for the 48-0 win.